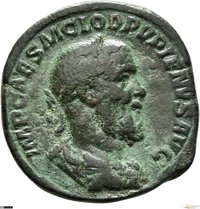 "Pupienus (Latin: Marcus Clodius Pupienus Maximus Augustus; born c. 165/170 – 29 July 238), also known as Pupienus Maximus, was Roman Emperor with Balbinus for three months in 238, during the Year of the Six Emperors. The sources for this period are scant, and thus knowledge of the emperor is limited. In most contemporary texts Pupienus is referred to by his cognomen "Maximus" rather than by his second nomen (family name) Pupienus." - (en.wikipedia.org 30.01.2020)